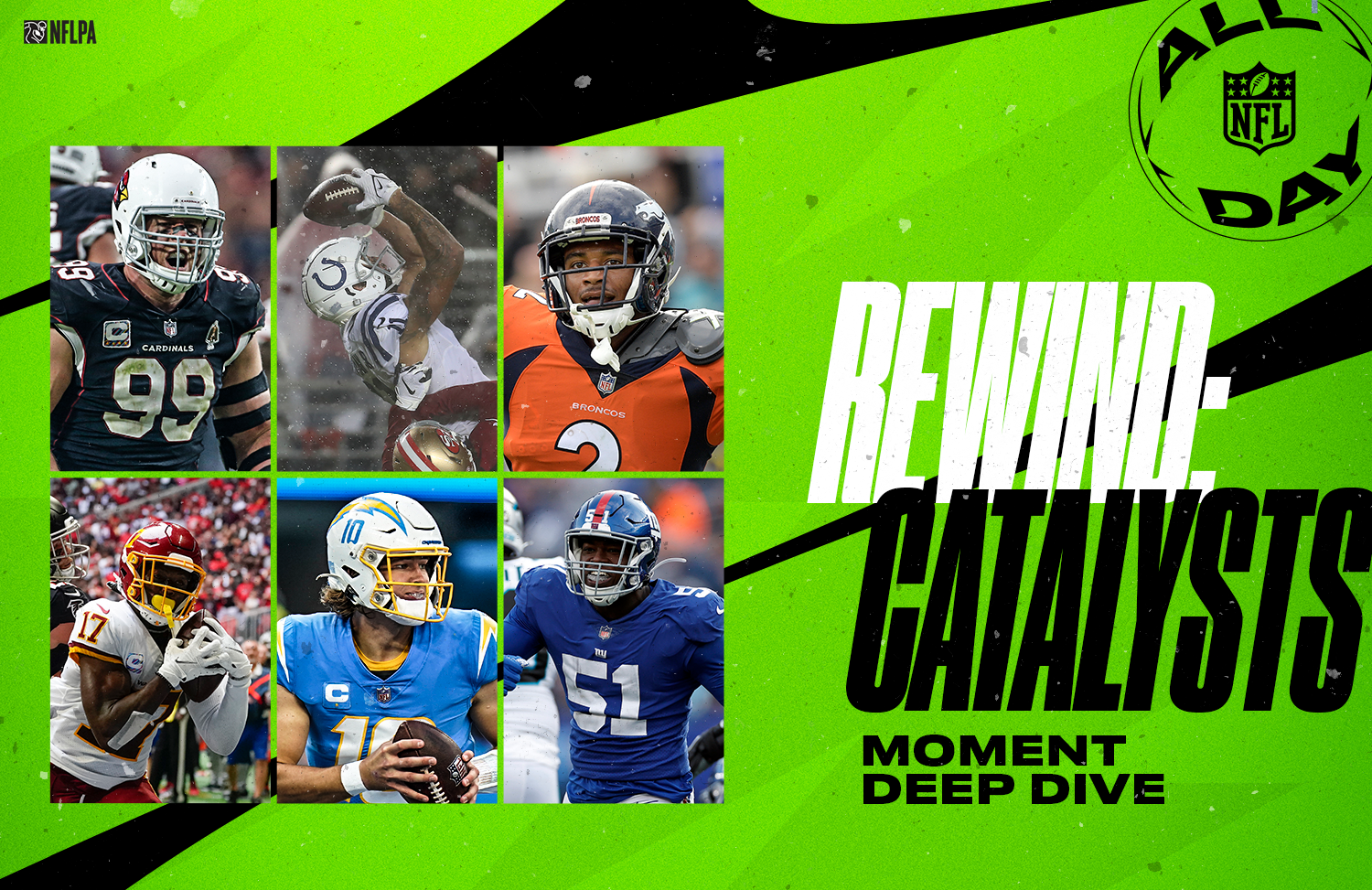 In NFL ALL DAY’s Rewind: Catalysts drop, we’re celebrating the players who step up when it’s time to ignite a fire under their team.

Whether it’s to flip the script after a slow start to the game, cause momentum to swing back in their team’s favor in the second half, or clinch a big win in the final moments, these players are known for making game-altering plays when their team needs them most.

But a big play doesn’t exist in a vacuum - the context leading up to it is often as important as the play itself.

To help shine a light on some of these plays, Chris Otis (@OtisALLDAY) from our Community team is taking you for a deep dive on six all new Moment Editions from the Rewind: Catalysts drop, exploring just what makes these plays, and these players, so special and exciting.

‍Despite entering the 4th quarter with a three-score lead, the Chargers found themselves needing a spark as they struggled to put away a feisty Steelers team that just would not quit.

Enter quarterback Justin Herbert, whose big-play ability can change a game in a flash.

Facing 3rd-and-5 from the Pittsburgh 47-yard line as they nursed what had become a mere 7-point cushion, Herbert took matters into his own hands. As he dropped back to pass, a massive hole opened up in front of him, and he sprinted out of the pocket and darted his way down the field for a 36-yard gain.

A penalty on the play would set the Chargers up with 1st-and-goal from the 5, which was plenty close enough for the Chargers to punch it in on the next play to go back up by two scores.

The Steelers would wind up storming back in front, but the Chargers ultimately pulled ahead for good to close out the 41-37 win in what was one of the wildest contests of the 2021 Regular Season.

Crucial late-game 4th downs are when true catalysts make their mark and swing the momentum back in their team’s favor.

Up 10-7 about halfway through the 4th quarter, the Cardinals lost a fumble that set the 49ers up near midfield with a chance to tie the game or take the lead. JJ Watt, long known for his immense production along the defensive front, ensured that there would be no further progress.

On 4th-and-4, 49ers rookie quarterback Trey Lance dropped back and tried to zip a quick pass over the middle, but Watt leaped high in the air to deflect the pass with his one free arm, despite being double-teamed by two San Francisco offensive linemen.

The ball would fall incomplete as a result, and the Cardinals took back control of the ball with great field position. Five plays later, they were in the end zone, giving them a larger cushion in what would wind up a narrow 17-10 victory, one which kept them undefeated on the season  and moved them to 5-0.

When brutal weather results in sloppy playing conditions, it becomes even more imperative that your biggest playmakers make their presence felt during crunchtime.

As the rain poured down relentlessly, the Colts and 49ers found themselves locked in a tight contest, with Indy clinging to a 23-18 lead with just a few minutes remaining in the 4th quarter.

On 3rd-and-10 from the 49ers 28-yard line, the Colts were facing the real possibility of handing the ball back to San Francisco with a one-score lead. That is, until Michael Pittman Jr. decided to call game.

Quarterback Carson Wentz faked a screen pass before launching the ball downfield towards Pittman, who had found some space in the 49ers coverage down the sideline. Pittman leapt up above the defender, catching the ball at the apex of his jump as he spun towards the sideline, and stumbled before diving into the end zone for a game-sealing touchdown.

The ensuing extra point put the Colts up 30-18, which is how the rain-soaked game would end a few minutes later.

Every catalyst’s story starts somewhere, and for Azeez Ojulari, his story truly began in the Week 7 matchup between his New York Giants and the visiting Carolina Panthers.

Coming into the week, Ojulari had already produced quite well for a rookie with three sacks over the Giants’ first six games, but he broke out in a big way against the Panthers. Throughout the second half, the 21-year old pass-rusher just couldn’t be slowed down, tallying 2.5 sacks as the Giants completely shut down the Panthers offense en route to a 25-3 victory.

To top off his career day, on 4th-and-10 with about three minutes remaining, Ojulari blew past the Panthers blockers on the left edge and chased Carolina QB P.J. Walker out of the pocket before diving and catching Walker by his shoestrings, bringing him down for a 4-yard loss. The play resulted in a turnover on downs and sealed the victory for the Giants.

One first down and a couple kneel-downs later, the Giants walked off the field victorious, due in no small part to Ojulari’s incredible efforts in the second half.

Having big-time playmakers at wide receiver is one of the best ways to ensure your team can swing momentum back in your favor in an instant.

Down 10-0 midway through the 2nd quarter in their Week 4 matchup with the Atlanta Falcons, the Washington Football Team were facing the prospect of their most promising drive yet stalling out as they lined up for a 3rd-and-8 from the Falcons 33 yard-line.

Washington’s star wide receiver Terry McLaurin had other plans, however.

Running a simple go-route down the left sideline, McLaurin blew past his defender, and quarterback Taylor Heinecke launched a perfect deep ball placed where only his receiver could reach it. McLaurin leaped as he was crossing the goal-line and let the ball travel into his outstretched arms before tumbling across the end zone for the score.

The touchdown ignited the Washington offense and set things in motion for one of the most exciting, back-and-forth matchups of the early regular season, which Washington would ultimately win 34-30.

For some, being a catalyst is in their blood. That’s certainly the case for star rookie cornerback Patrick Surtain II, whose name may seem eerily familiar to any quarterbacks who played in the early 2000s.

Back in Week 2 of the 2021 Regular Season, the Denver Broncos were holding onto a two-score lead over the Jacksonville Jaguars early in the 4th quarter when the Jags began to drive. On a 1st down play from midfield, Jags rookie quarterback Trevor Lawrence received the shotgun snap and promptly launched a missile down the sideline towards a sprinting receiver.

The only problem? Patrick Surtain II was covering him like a blanket.

Surtain II positioned himself perfectly between the receiver and where the ball was heading, and twisted back to make an incredible grab as he fell towards the sideline - his first career interception.

Replay would confirm that Surtain II somehow managed to get both feet in-bounds before tumbling out of play, resulting in Denver taking possession back from the Jaguars. The Broncos would ultimately hold on to win 23-13 to move to 2-0 on the young season.