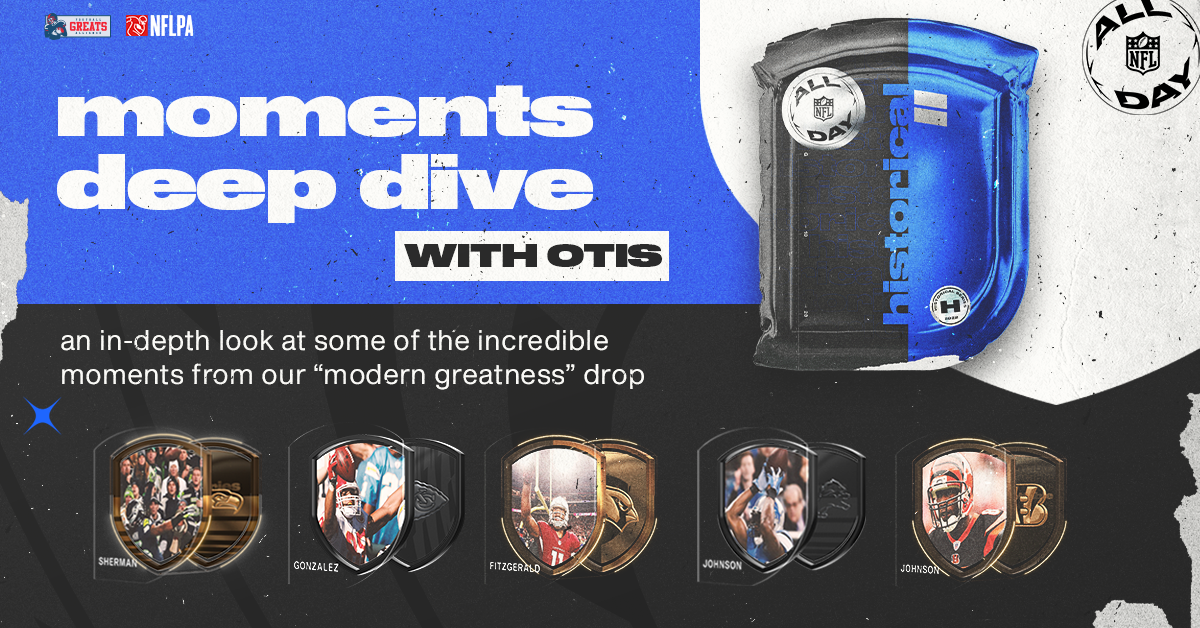 Not on NFL ALL DAY yet? Discover a new form of football fandom and sign up now!

Greatness may be difficult to define, but we all know it when we see it. On the football field, when those moments occur that force us all to pick our jaws up off the floor and spend the next few days, weeks, or even months processing what we just witnessed, THAT is greatness.

NFL ALL DAY’s “Modern Greatness” drop celebrated some of the most spectacular plays and players of the 2000s, focusing on those that helped revolutionize the sport into the pass-heavy game we see today with their remarkable receiving ability, and those who did their best to stop them.

Join Otis from the NFL ALL DAY Community Team for a deep dive into the five of the most exciting new Moments, ranging from Common to Legendary, released in the “Modern Greatness” drop.

You can find all these Moments and more on the marketplace. Add them to your collection today!

One of the greatest wide receivers in NFL history – and arguably the greatest Arizona Cardinal in team history regardless of position – Larry Fitzgerald was simply known for being as reliable as they come, no matter the circumstances or pressure.

So when tasked with leading the Cardinals to just their second-ever Conference Championship appearance, Fitz stepped up and carried the team on his back.

Facing off against the vaunted Green Bay Packers in the Divisional Round, the Cardinals found themselves locked in a back-and-forth battle that couldn’t be settled in regulation, as the game went into overtime tied at 20.

Fitzgerald had already had a great game to this point, but overtime is when he took matters into his own hands and dragged his team across the finish line.

On the first play of overtime after Arizona won the coin toss, Fitzgerald found some open space after his quarterback eluded the pass rush, and then received a pass about 15 yards downfield. After weaving his way through the Packers defense for another 60 yards or so, he was finally brought down at the Packers 5-yard line for a 75 yard gain.

Two plays later, Fitzgerald received a quick shovel pass and rumbled into the end zone for the game-winning score, bringing them back to the NFC Championship for the first time since 2008, and finishing off his eight-catch, 176-yard performance in style.

When a trip to the Super Bowl is on the line, the game’s best step up and leave it all on the field. Richard Sherman would certainly qualify as one of the best cornerbacks of his generation, so it should come as no surprise that the three-time 1st-Team All-Pro selection stepped up to make one of the greatest defensive plays in recent memory when his team needed him most.

In the 2014 NFC Championship game between the Seattle Seahawks and San Francisco 49ers, the two bitter divisional rivals were locked in a back-and-forth affair that came down to the final minute. The Seahawks were holding onto a 23-17 lead, but the 49ers were on the move and snapped the ball with 30 seconds left on 1st-and-10 from the Seahawks 18-yard line.

Sherman was in single coverage on the right sideline, guarding one of the 49ers most dangerous receiving targets, and the ball was thrown his way towards the back corner of the end zone. Sherman promptly spun around and jumped high into the air, fully extending his left arm out above him to try to get his hand on the ball.

Not only did he wind up deflecting the ball away, he batted it back towards his teammate who was trailing behind him, and the ball was intercepted in the end zone to seal the win.

The victory sent the Seahawks to Super Bowl XLVIII, which they’d go on to win in a blowout, due in no small part to Sherman’s shutdown play and leadership on the defensive side of the ball.

Chad Johnson may be one of the most colorful personalities in the history of football, but the Cincinnati Bengals legend was also one of the top wide receivers in the game throughout the first decade of the 2000s, and he regularly put up ridiculous numbers to match the flashy celebrations that made him so famous and beloved.

One performance against the San Diego Chargers, though, stands above the rest as Ochocinco’s magnum opus: a 2006 Week 10 matchup between the Bengals and the visiting San Diego Chargers, which would wind up being one of the best games of the entire season.

Johnson was locked in throughout, hauling in 11 catches on 12 targets and accumulating 260 receiving yards, which would stand as the team record until another exciting Bengals wideout surpassed that mark during the 2021 season.

Two absolute missiles thrown downfield caught by Johnson for 51-yard and 74-yard TD receptions in the 1st and 3rd quarters, respectively, put an exclamation point on Ochocinco’s historic masterpiece of a performance, and the dancing celebration after the second score was the cherry on top.

Though the Chargers wound up pulling off the comeback 49-41 win over the Bengals, Ochocinco’s special day was arguably the best of his career, and helped catapult him to his second consecutive 1st-Team All-Pro selection in 2006.

If an offensive coordinator were to craft the perfect wide receiver in a lab, the result would probably be someone that looks and plays like Detroit Lions legend Calvin Johnson. With his immense size, elite athleticism, soft hands, and incredible football acumen, there have been very few offensive weapons quite as dangerous on the field as the man appropriately known as Megatron.

And throughout his career, nobody knew more about the dangers he posed to opposing defenses quite like his NFC North rivals, such as the Green Bay Packers.

In one particular matchup against the Packers back on December 3, 2015 - which would ultimately wind up being the last time he ever suited up against the Packers, as he retired after the season - Megatron made one of the most spectacular TD catches of his illustrious career.

On the first play after the Lions defense intercepted a pass and set the offense up with great field position at the Packers 17-yard line, Johnson found himself in single coverage on the right side, and the Lions QB knew exactly what to do: toss the ball up to where only Megatron could get it.

Johnson leapt high in the air above the Packers defender, caught the ball over his head, and then held the ball away with one hand as he dragged his left foot on the turf to ensure both feet had touched in-bounds – despite there being virtually no space to do so between the defender and the sideline.

Though the Lions would go on to lose this game at the buzzer, the score gave Detroit a 17-0 lead at the time, and it would ultimately be the last touchdown he’d score at home against an NFC North opponent, and the third-to-last touchdown of his entire career.

Nobody epitomizes greatness at the tight end position as much as Tony Gonzalez. In fact, his 14 Pro Bowl appearances and 6 1st-Team All-Pro selections make a compelling case for him to be considered the greatest tight end of all-time.

But numbers only tell part of the story. Gonzalez’s ability to step up when it mattered most set him apart from not only his fellow tight ends, but from most players on the field in general.

Take the 2007 Week 4 matchup between his Kansas City Chiefs and the hosting San Diego Chargers, for instance. The Chiefs started slowly in this one, only managing to hit a couple field goals on their way to a 16-6 deficit at halftime, and still trailed by 7 late in the 3rd quarter. The Chiefs needed someone to make a big play, and they needed it fast.

On 2nd-and-10 from the San Diego 22-yard line, Gonzalez took off on a simple corner route from his usual spot lined up along the offensive line, and made a cut towards the pylon around the 10-yard line.

Gonzalez was certainly not open in the traditional sense - there were two defenders right on him and a third lurking nearby - but his quarterback trusted him to be able to make a play, and he lofted the ball towards the end zone. Gonzalez turned around and jumped, catching the ball between the two defenders and securing it as he was brought to the turf.

The ensuing extra point tied the game at 16 apiece, but the Chiefs had all the momentum as a result of Gonzalez’s huge touchdown, and would go on to win 30-16.