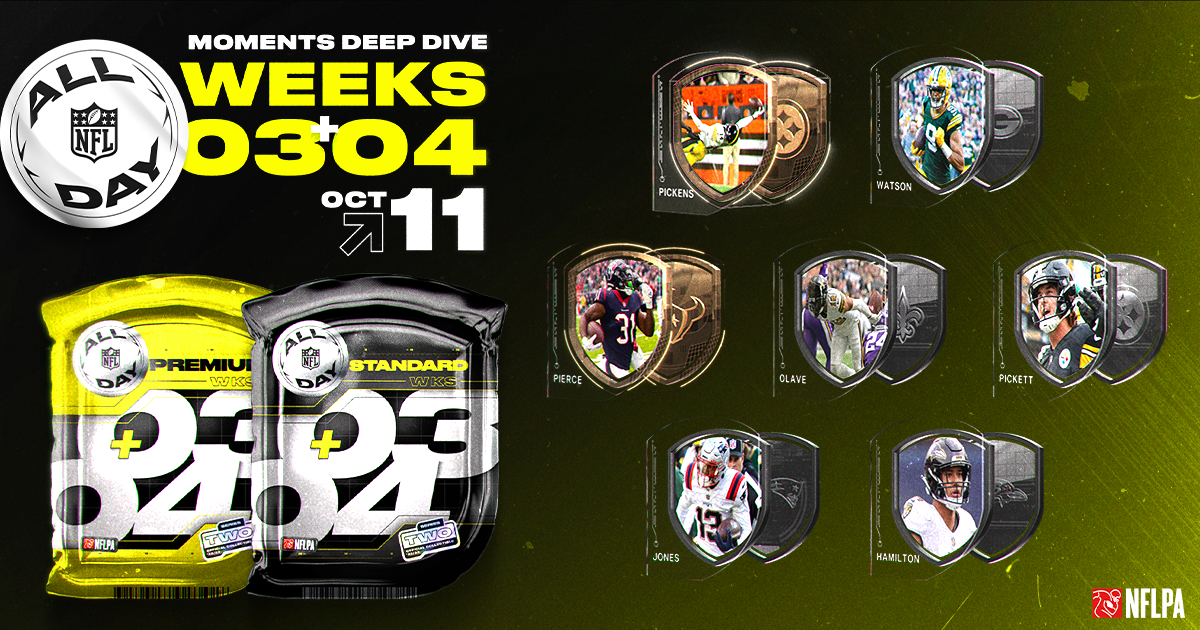 Not on NFL ALL DAY yet? Discover a new form of football fandom and sign up now!

If the first couple weeks of the NFL season were all about chaos, improbable comebacks, and unexpected outcomes, Weeks 3 and 4 were all about rookies, the NFL’s next generation, making an impact and beginning to establish themselves as forces to be reckoned with in the league.

As such, many of the most exciting new Moments coming to NFL ALL DAY in the new Weeks 3-4 Standard and Premium packs are from rookies making their first appearances on the platform, as NFL ALL DAY aims to celebrate the young stars who will be tasked with carrying our great game into the future.

Join Otis from the ALL DAY Community Team below as he dives deep into the stories behind seven of his favorite new Moments from the new packs, ranging from 1st-rounders who are already living up to the hype to later-round picks fighting hard to make a name for themselves in the greatest game on Earth.

Is Week 3 too early to call something the “Catch of the Year”? Perhaps, but it may not be humanly possible to top what Pittsburgh Steelers rookie George Pickens did against the Cleveland Browns with the whole world watching on Thursday Night Football.

Late in the 1st quarter with the Steelers trailing 7-0, Pickens ran a go-route down the right sideline on a 2nd-and-3 play from the Pittsburgh 46-yard line. The Steelers quarterback initially looked left, but had to look back in Pickens’ direction as the pressure forced him out right. He launched a pass downfield, and then Pickens proceeded to break the Internet.

Calling this an acrobatic catch would be an understatement akin to calling the moon landing a “nice moment for science”. Pickens contorted his body backwards, reaching back over his head with one hand to the point where he was nearly parallel to the ground, and somehow pulled the ball into his body to complete the catch as he fell to the turf. The impossible reception was good for 36 yards and propelled the Steelers to tie the score a few plays later, though they’d eventually fall to the Browns 29-17.

When the Steelers drafted Pickens in the 2nd round of the 2022 NFL Draft, they did so with his athleticism and big-play ability in mind, but even they could not have imagined that he’d make a play like this so early in his NFL career. Here’s to hoping this is just the first of many incredible catches to come.

Every year there are a handful of later-round rookies who make the entire NFL look silly for passing up on so many opportunities to draft them. This year, Houston Texans rookie RB Dameon Pierce looks to be near the top of that list.

Taking advantage of a rare opportunity for a 4th-round pick to become an immediate offensive starter by earning the #1 RB job in training camp, Pierce has wasted no time putting the rest of the league on notice, running with power and speed on his way to making himself an early contender for OROY.

And in Week 4 against the Los Angeles Chargers, Pierce truly broke out, racking up 131 yards on the ground and hauling in six catches. The biggest play of the day, of course, was this 75-yard TD rush that showed off the burst, vision, and speed that stand to make him an impact starter in the NFL for the next several years at minimum.

Taking a toss to the right side, Pierce quickly found his lane and accelerated through it without hesitation before finding himself with just one man to beat about 10 yards past the line of scrimmage. One last subtle change of direction back towards the sideline was all it took to leave that defender in the dust, and then Pierce was gone, outrunning one final Chargers defender as he steamrolled into the end zone.

The Texans would wind up losing the game 34-24, but Pierce’s huge play sparked a comeback attempt that saw Houston cut a 21-point deficit to just 3 before the Chargers put the game out of reach late.

Continuing with the theme of 2022 4th-round picks showing out early in their rookie seasons, New England Patriots CB Jack Jones had himself a game against the reigning MVP and the Green Bay Packers.

Making the first start of his NFL career, Jones started things off with a bang, forcing and recovering a fumble on the Packers first drive of the game, setting his Patriots up with solid field position and a great opportunity to take control of the game early on.

But the best was yet to come.

With the Packers leading Pats 7-3 as the first half was coming to a close, Green Bay was trying to move the ball downfield for a quick score before the break, and got set for a 3rd-and-9 play from their own 32-yard line.

Jack Jones decided to flip the script and take matters into his own hands, though. The Packers tried to strike with a quick out route just past the first down marker, but Jones read it the entire way, giving the receiver just enough space to make him seem open before making a break on the ball. He got into position before the ball arrived, slowed down just enough to make the catch, and then continued sprinting down the field to the end zone, giving the Pats an unexpected 10-7 lead going into the half.

Jones would add 7 tackles and a pass deflection to go along with the pick-six, forced fumble, and fumble recovery, stuffing the stat sheet in his first game as a starter. The Patriots, though, went on to fall to the Packers in overtime, 27-24.

The first QB off the board in the 2022 NFL Draft after being drafted with the 20th pick by the Pittsburgh Steelers, it was only a matter of time before Kenny Pickett was given his opportunity to showcase his talent. But even so, not many could have predicted that he’d be elevated to the top of the depth chart at halftime during the Steelers Week 4 contest against the Jets.

Throughout the second half, Pickett spread the ball around the field, and provided a much needed spark with his toughness that helped get the Pittsburgh offense back in gear. His toughness and ability were especially impressive on the two touchdown drives he led the team on in the 3rd and 4th quarters, respectively, both of which he finished off himself on grueling short touchdown runs.

The second score gave the Steelers a 20-10 4th quarter lead, but the Jets would wind up coming back to steal the win 24-20 by scoring with 16 seconds to go in the game. Despite the tough loss, however, this game marked the start of the Kenny Pickett era in Pittsburgh, and his two touchdown performance in the second half is certainly a sign of good things to come.

The 2022 NFL Draft was a record-breaker in terms of the number of WRs taken in the first 20 picks, and New Orleans Saints rookie Chris Olave, who was taken 11th overall, has been doing his best to try to separate himself as the best of the bunch.

Through four weeks, he’s become the Saints most productive and reliable weapon on offense, leading the team in yards from scrimmage (and nearly doubling the next player on that list). And in the Saints special Week 4 matchup against the Minnesota Vikings that took place in London, Olave found the end zone for the first time in his NFL career.

Trailing 7-0 in the 2nd quarter, the Saints offense was facing 3rd-and-goal from the 4-yard line, and needed someone to step up to get the ball over the line. Olave answered the call.

Running straight at two defenders who were parked just over the goal line, Olave then showcased patience and football intelligence, hesitating and faking to the outside before cutting back inside, where his quarterback was able to deliver a pass right into his chest just before the safety arrived to try to break up the pass. He held on for the six points, and the ensuing extra point tied the game at 7.

Olave would finish with 4 catches for 67 yards on the day, including that TD, though the Saints would ultimately lose 28-25 when a game-tying field goal attempt came up heartbreakingly short after striking one of the uprights and the crossbar.

As a rookie walking into an offense with some holes to fill despite being led by an MVP, Green Bay Packers WR Christian Watson, who was drafted in the 2nd round of the 2022 NFL Draft, knows that a golden opportunity exists in front of him to carve out an impactful role on a team with championship aspirations.

And with his unusual blend of size and speed, there is every reason to believe that he will take advantage of that rare chance, especially if he can continue to make big plays when his number is called, just like he did against the Patriots in Week 4.

The Packers trailed 3-0 early in the 2nd quarter against the Pats, but took advantage of a penalty that gave them good field position to drive down to the New England 15-yard line. Wary of being too predictable in the red zone against a well-coached defense, Green Bay called for a bit of trickery, bringing Watson in motion before the snap and handing the ball off to him on an end-around on 1st-and-10, and Watson promptly exploded around the edge with his top-line speed before turning the corner and accelerating into the end zone for his first career NFL touchdown before a Patriot defender could even think about getting near him

The play gave the Packers a 7-3 lead, and though Watson would only add a single catch to his tally on the day, his first-ever touchdown played a crucial role in the Packers 27-24 overtime victory over New England, and showcased a glimpse of the raw potential that makes his future so exciting to think about.

If you’re going to get drafted in the 1st round as a safety in the modern NFL, you have to be an incredibly special player who can make a game-changing impact when it matters most. Baltimore Ravens rookie Kyle Hamilton surely fits that bill, and he showcased exactly why the Ravens drafted him 14th overall this year when the Ravens visited the New England Patriots in Week 3.

The Ravens and Pats had been locked in an intense, back-and-forth game that had already seen four lead-changes by the time Ravens found themselves fighting to hold onto a 31-26 lead with time dwindling in the 4th quarter.

The Patriots were on the move, and a quick pass over the middle was turning into a nice gain that was about to set New England up with a first down inside the Baltimore 40-yard line, until Kyle Hamilton decided to derail that plan and turn the game back in the Ravens favor.

Chasing the Patriots receiver from behind, Hamilton caught up and punched the ball with enough force to knock it clean out of the runner’s arms, and a teammate was able to dive on the loose ball before it bounced out of bounds, completing the momentum-shifting turnover.

It was a play of pure hustle and awareness, the kind that helps win games more often than not, and directly led to the Ravens being able to put the game out of reach with another touchdown that increased their lead to 37-26, which is how the game would end a few minutes later. 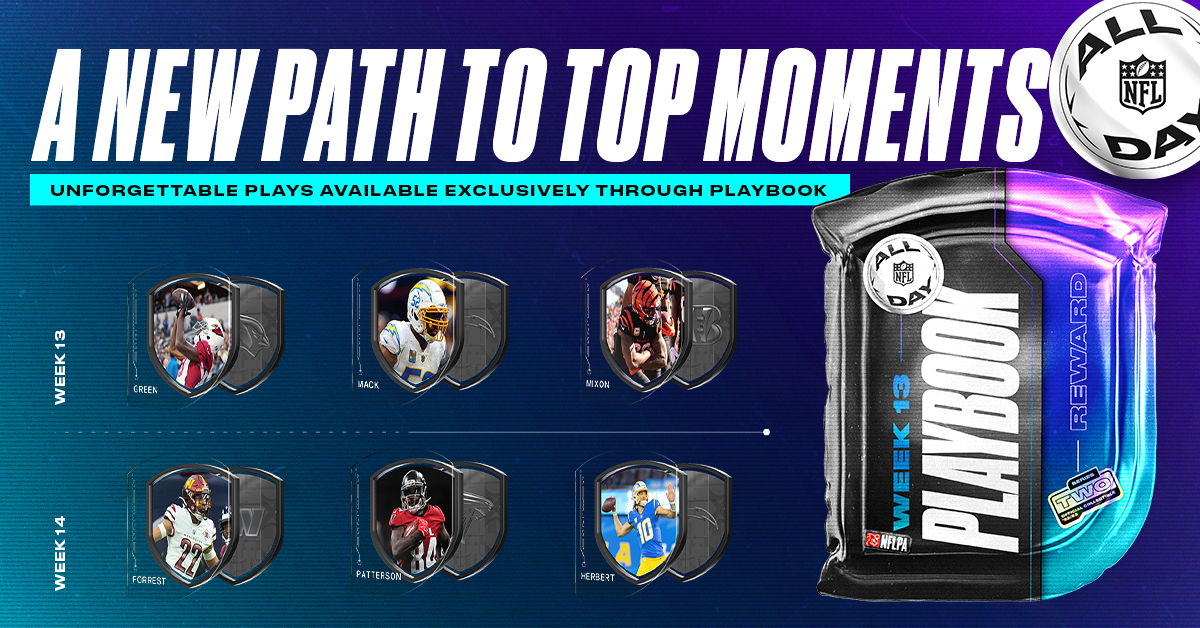 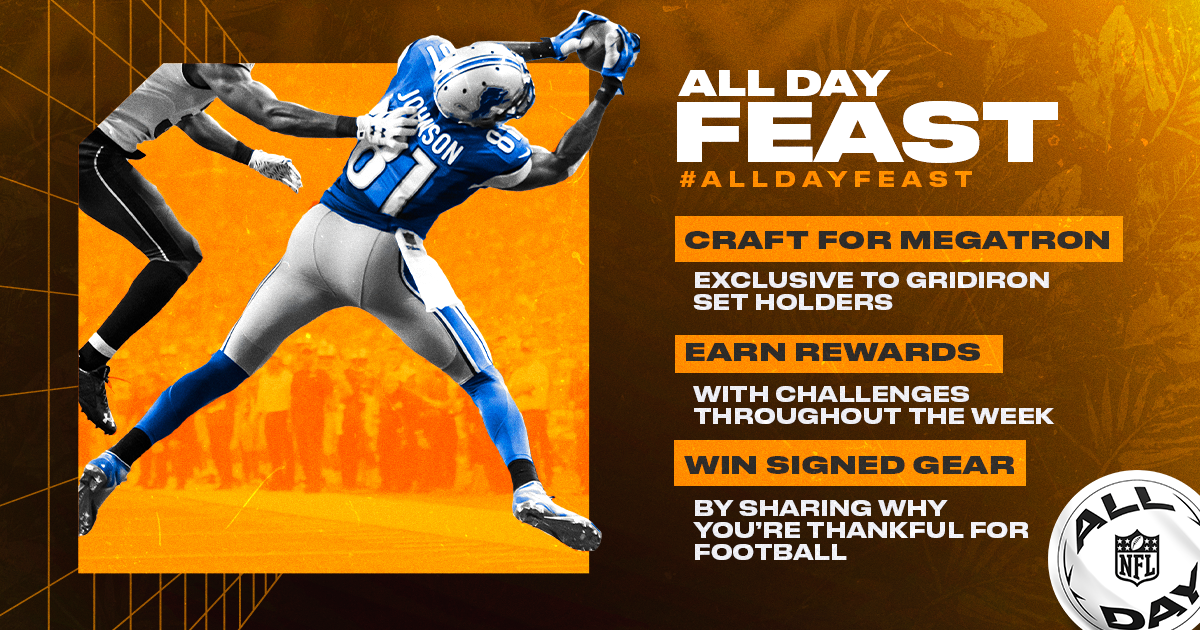