OWN THE MOST ICONIC MOMENTS IN NFL HISTORY 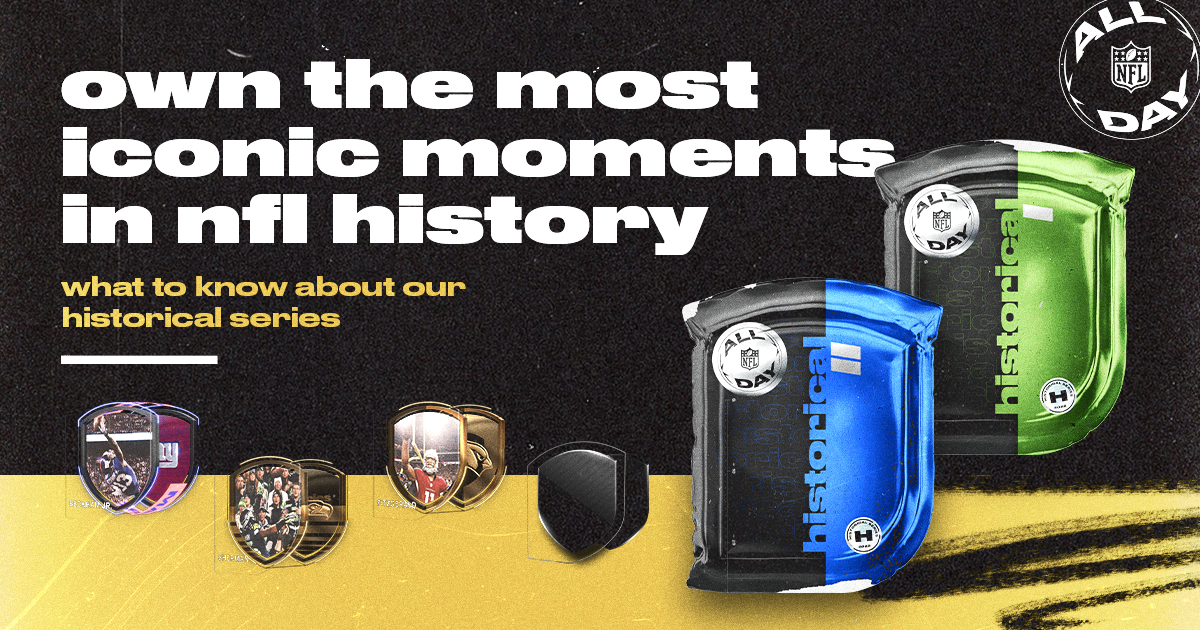 There are some Moments everyone wants a piece of.

The plays that, even years later, we haven’t stopped talking about.

The ones that define not just a game but a season - or even an era.

Our Historical Series is all about bringing fans in on that iconic action.

Together with the NFL, we’re chronicling the history of the sport you love and giving you the chance to stake your claim to the game’s most memorable Moments.

This week, we’ll be announcing that one of the NFL’s most unforgettable plays is coming to NFL ALL DAY as an Ultimate-tier Moment - headlining a super-exclusive mini-drop with a carefully curated selection of Moments you’ll be proud to collect.

Before we reveal which iconic play is getting that Ultimate treatment, we want to give you a glimpse at what to expect from our Historical Series going forward.

The Historical Series is a celebration of the game, and, with every pack drop, we’ll present some combination of the following:

As you saw recently with our Calvin Johnson Crafting Challenge, we’re focused on incorporating Historical Series sets into some of our most exciting Historical campaigns.

Though not every set will be rewarded in the same way, we plan to explore using set ownership as a pathway for access to Historical Challenges, Premium Historical pack drops, meet-and-greet opportunities and other surprise rewards.

Some players have huge catalogs of incredible highlights…

But, for our Historical Series, we’re focused on curating the best of the best and ensuring you can collect with confidence.

That’s why, no matter who it is and how many unbelievable plays they’ve made, no single player will appear more than once per tier in Historical Series pack drops every 5 years.

Similarly, each player will have a maximum of 1 Historical Series Crafting Challenge every 5 years.

And at the highest tier, we’ll be even more precious - no player can ever have more than one Ultimate-tier Moment released in Historical Series pack drops, even after 5 years have passed. (A Crafting Challenge could produce a player’s second Ultimate-tier Moment if fewer than 10 collectors complete it)

Though incredible highlights from active players are eligible to be Historical Moments, we will not feature active players in any Historical Series drops held during the NFL season (occurring any time between Week 1 and the Super Bowl).

As for what highlights qualify for Historical Series Moments, we are currently looking at any action prior to the 2021 season, when we launched our product.

Out of respect for our contemporary Series, any highlights from 2021 onward will not become eligible to be Historical Series Moments for 7 years. That means until 2028 at the earliest, Series 1 will be the only commemoration of the 2021 NFL season on NFL ALL DAY.

Whereas our contemporary Series will open and close along with each NFL season (i.e. Series 1 corresponded with the 2021 season and Series 2 the 2022 season), our Historical Series will align with the calendar years.

Our upcoming drop - headlined by one of the NFL’s most celebrated plays of all time - will be the final one in Historical Series 1 (which encompasses April’s “In The Spotlight” drop, August’s “Enshrinement: Class of 2022” drop and September’s “Modern Greatness” drop).