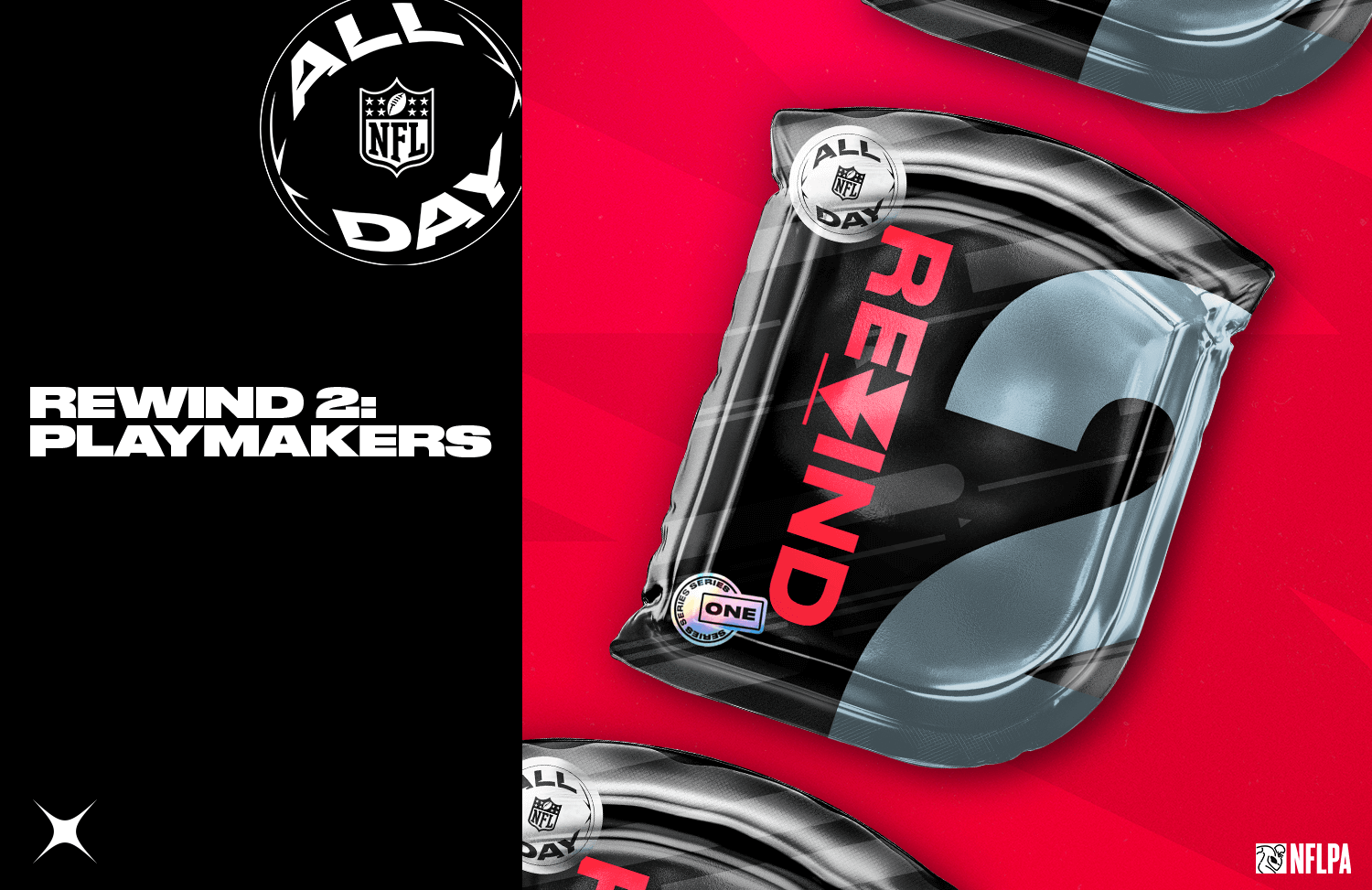 The game of football may be won and lost in the trenches, but it’s the biggest, flashiest plays that really capture our imagination and permanently etch themselves into our collective memory.

NFL ALL DAY’s Rewind: Playmakers drop showcases some of the NFL’s most elite playmaking talent, from cannon-armed dual-threat quarterbacks and lightning-fast skill position players to those on the other side of the ball who disrupt offenses in the most exciting ways possible.

To dive deeper into some of the 2021 NFL Season’s most exciting plays and NFL ALL DAY’s newest star-studded pack drop, Chris Otis (@OTISALLDAY) from our Community team takes a closer look at six all-new Moment Editions that stand out to him above the rest.

Want to get your hands on these jaw-dropping Playmaker Moments, officially licensed as video collectibles in partnership with the NFL? Create your NFL ALL DAY account today and start your collection.

Is there anyone better at evading pressure while keeping his eyes downfield than Lamar Jackson?

On this crucial 3rd-and-10 during the opening drive of the second half of Baltimore’s tightly contested Week 12 matchup with the Cleveland Browns, the Ravens’ electric superstar read and immediately reacted to the intense pass rush, backpedaling faster than most humans can run forward to buy time for his receivers downfield.

Though the play originally started at Cleveland’s 13-yard line, Jackson was way back at the 35, gracefully retreating 22 yards before finally firing the ball downfield just as All-Pro pass rusher Myles Garrett was set to make contact.

Baltimore’s star TE Mark Andrews, Jackson’s favorite target, had worked his way open and secured the catch in the end zone for six to put the finishing touches on his star QB’s NFL ALL DAY Debut Moment.

The ensuing extra point extended the Ravens lead to 13-3, and they’d wind up holding on for the narrow 16-10 victory. Jackson racked up over 200 total yards through the air and on the ground to go along with this crucial second half TD.

This is Lamar Jackson’s first collectible on NFL ALL DAY, but if he keeps producing highlight reel worthy performances on the field, it certainly won’t be his last.

There are a lot of statistical arguments that one could make for Justin Tucker being the greatest kicker in NFL history.

After all, he is the NFL leader in FG% through his 10 years in the league, and has made numerous incredibly clutch kicks throughout his career.

Perhaps the most compelling argument, though, is that there isn’t any other kicker who would strike real fear into the hearts of opposing fans as by lining up for what would be a record-breaking 66-yard field goal attempt with his team trailing by one point and only a few seconds remaining on the clock.

The stakes were simple - make the impossible kick and the Ravens win.

Succumb to the laws of physics and they lose. But an incredible number of small details had to line up perfectly for this kick to even have a chance to be converted.

The kick was struck beautifully, of course, but the ball still slammed into the crossbar before miraculously bouncing back up and through the uprights as time expired, giving the Ravens the improbable 19-17 win over the Lions, and Justin Tucker the new NFL record for longest FG ever made.

It’s a play that Justin Fields will probably run countless times in his career, but this play action roll out pass will always have a special place in the hearts, and now NFL ALL DAY accounts, of Bears fans everywhere.

With the Bears trailing 3-0 in the 2nd quarter on the road in Vegas, Fields led his offense down the field and deep into the red zone. On 2nd-and-goal from the 2-yard line, Fields rolled out right after faking the handoff, and held on as long as he could before tossing the ball towards the back of the end zone just as Las Vegas’ Pro Bowl LB Denzel Perryman arrived to take him down.

Somehow, Fields managed to place the pass where only his TE Jesper Horsted had a realistic shot of pulling the ball down; the result was Fields’ first career TD pass and NFL ALL DAY Debut Moment.

The score gave the Bears a 7-3 lead, which they’d never relinquish on their way to a 20-9 road victory over the Raiders.

You can add this iconic Moment in Fields’ young and blossoming career right here.

It doesn’t matter whether he’s lining up as a wide receiver, cornerback, or return man, Jamal Agnew has game-breaking speed and playmaking ability.

With the Cardinals preparing for what would have been a record-breaking 68-yard field goal if it had been converted, Agnew decided to flip the script and add his name to the record books instead.

The field goal try fell short and was caught at the very back of the end zone by Agnew, who promptly turned on the jets as he began making his way up the field.

He made his first cut towards the sideline around the 2-yard line, and then evaded several Cardinals would-be tacklers on his way down the field. After breaking a tackle at the Jaguars 35-yard line, he flipped on the afterburners and flew past everyone else, including his own blockers, before dancing his way into the end zone for an NFL record-tying 109-yard field goal return touchdown.

The score would give the Jaguars a 13-7 lead going into the half, though they’d eventually fall to the Cardinals 30-19.

Own a piece of NFL history, courtesy of Jamal Agnew, exclusively on NFL All Day.

To be the best, you have to beat the best. That refrain must have been bouncing around the heads of Gregory Rousseau and the Buffalo Bills defense as they rolled into Arrowhead Stadium for an early October matchup with what has been the NFL’s most prolific offense over the past few seasons.

Beat the best they did, with Rousseau - the Bill’s 2021 1st round pick - playing a huge part. Despite having a sizable lead late in the 3rd quarter, the Bills D found themselves up against their own end zone after Chiefs QB Patrick Mahomes marched his offense down the field.

Of course, no lead is safe against the Chiefs electrifying offense, so when Rousseau proceeded to tip Mahomes’ 1st-and-goal pass high into the air before bringing it down for his first career interception, he not only signaled his arrival as one of the league’s best young defensive linemen, but also kept the game firmly within the Bills’ control.

Buffalo would go onto win the game 38-20 to move to 4-1 on the young season, with Rousseau contributing 5 tackles and a sack in addition to that clutch interception.

Ugly weather battles are where superstar linebackers like Demario Davis can really make their presence felt.

That this particular Week 7 battle between the Saints and Seahawks came during a Monday night primetime matchup makes it all the better.

The All-Pro LB was all over the field in New Orleans’ 13-10 victory in Seattle, disrupting every facet of the Seahawks offense. When the Seahawks tried to run the ball, Davis was there, bringing running backs down behind the line of scrimmage himself or using a Seattle offensive lineman as a battering ram to take runners down for him. When they tried to pass, he was there to chase the quarterback around the backfield or to drop back in coverage and knock the pass away.

When it was all said and done, Davis racked up 10 total tackles on the day, including 4 for a loss and 2 sacks, to go along with a clutch 4th quarter pass-breakup that helped seal the 13-10 win and round out his NFL ALL DAY Debut Moment.