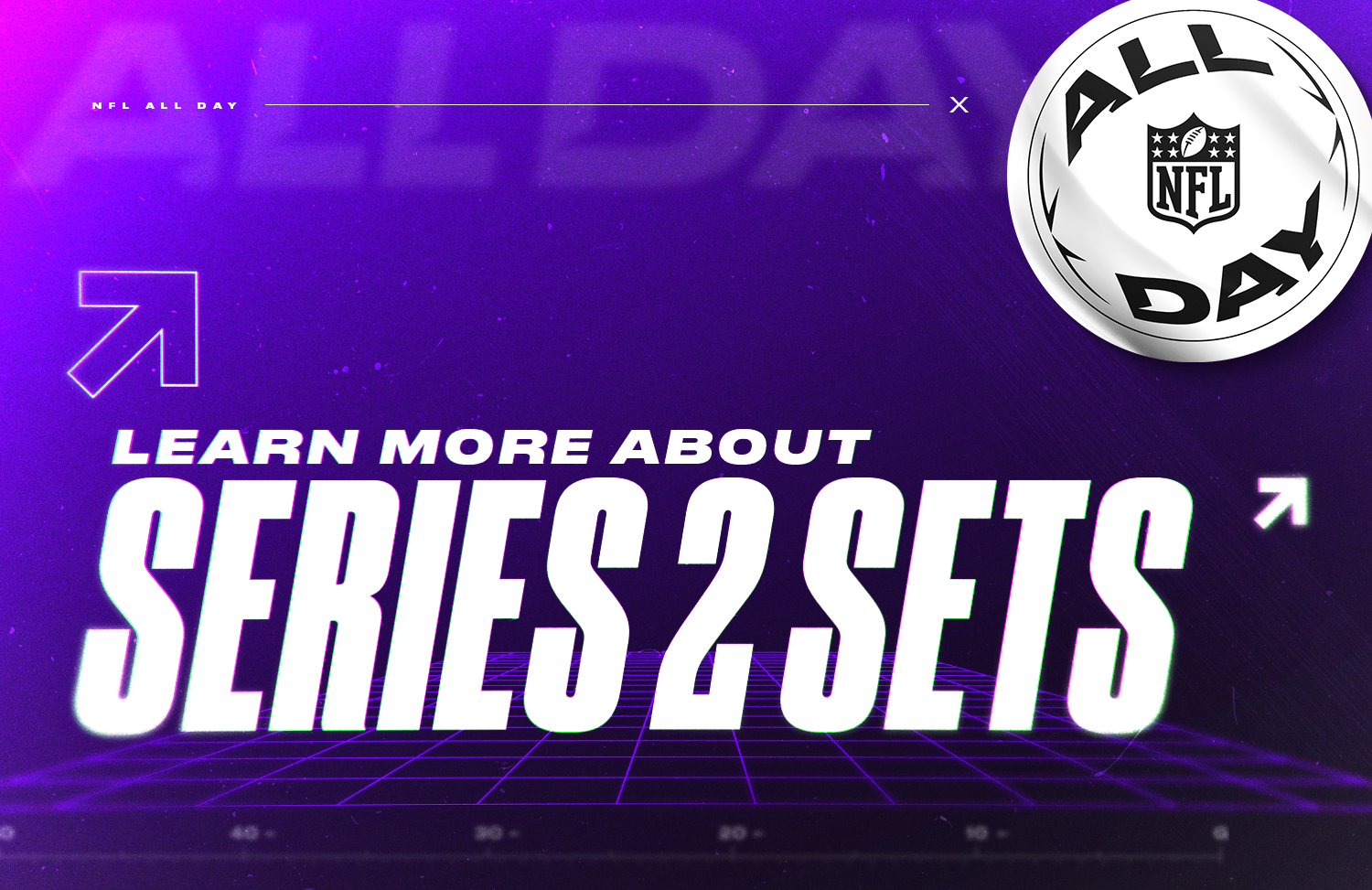 If you’ve looked through the NFL ALL DAY marketplace, you may have noticed each Moment is part of a set.

Love trick plays? You’ve probably found some of your favorite Moments in the “Hoodwinked” set. Or maybe you appreciate top-tier line play – the “In The Trenches” set is right up your alley!

New to NFL ALL DAY? Scroll to the bottom for more detail on what a set is.

As we start Series 2 on NFL ALL DAY (which will represent the 2022 NFL season), we want to share a look at which sets will be included in pack drops and reward distribution to start the regular season.

You’ll find some of your favorites from Series 1 continued, with a few new sets appearing for the first time.

We’ll also be introducing mixed-tier sets to our regular-season curation for the first time – with the goal of touching on certain ever-present themes across different levels of rarity. (Previously, our Playoff Sets in Series 1 were mixed-tier, as are some of our sets in the Historical Series)

“Core” vs. Special Edition: Just as in Series 1, each rarity tier will feature a “Core” set that acts as more of a catch-all for Moments at the tier – not necessarily thematically tied by play type or circumstances. Other sets at each tier will be “Special Edition,” with Moments featuring lower mint counts and linked by themes.

Inside the Pylons (Common Special Edition) - NEW!
‍Mint count of 7,000

Drive down the field. Get six. This set celebrates the plays where teams achieved what they set out to do– score a touchdown– however it is that they got it across the goal line.

The building blocks of great drives are first downs. These Moments kept the ball moving down the field on the march toward the end zone.

These are the Moments when the defense did its job, plain and simple. A sack. A pick. A tackle for a loss that forces a turnover on downs. It’s all here.

These Moments highlight deep connections that took the top off the defense and flipped the field, or big-time blasts from a kicker to put three points on the board.

You can’t sneak one past these guys. Whether they’re batting it away, forcing a fumble with a precision punch on the ball or picking it off and taking it back the other way. These defenders define tight coverage and you can see why, regardless of whether they’re trailing their man on a short slant or a deep go route.

This set is the definition of speed. These Moments are where you see some of the fastest guys in the league turn on the jets, whether it be on long runs, quick-to-the-QB sacks or speedy QB sneaks.

In the Trenches (Rare Special Edition)
Mint count of 699

In the Trenches is all about line play because that’s where the game is won, as they say. Bursting through to take down the QB, or a pancake block that springs a teammate for a long gain. The work of the big men up front doesn’t go unnoticed.

Highlighting the Moments that got you out of your seat and made you put your hands on your head in disbelief.

The best rookies announce their arrival in grand fashion. Rookie Revelation features the Moments when you knew that rookie was officially ready to be a force in the league.

Great players make big plays when it absolutely matters most – like pushing a team down the field in the closing seconds or forcing a turnover to put the game out of reach. These Moments capture the players who play the role of hero for their team and heartbreaker for their opponents.

Each Moment on NFL ALL DAY is part of a set.

For regular-season Moments, this will be either a “core” set, which represents a wide array of Moments across the same rarity tier, or a “special edition” set, a curated group of Moments with a similar theme.

Special-edition sets cover the wide variety of plays that make football great: from the victory-sealing action of “He Called Game” to the displays of pure speed featured in “Afterburners.”

Playoff Moments in our Series 1 were grouped into sets based on the round in which they occurred.

After reviewing our curation for Series 1, we have decided the following sets will not appear in Series 2: He Called Game (Common), Game Changers (Rare), 2-Minute Drill (Rare) and What a Drive (Legendary).

The Showtime set, previously a Rare-tier set, will return later in the season as a Mixed-tier special-edition set, but will not be part of our regular pack drops to start Series 2. It features epic Moments when players paired a big-time play with a big-time celebration. Mint count to be determined.